Wounded Warrior Woman’s Program W01 – Core Desires of a Woman’s Heart W01T03 – Who is This Jesus?

By the time you’re time is done here, you will have a much better personal understating of who Jesus is. It’s unfortunate, but too often the image of Jesus that we have been taught is not the whole picture of what He was actually like. What’s happened is that the enemy has gotten in and shifted our view of Jesus. He’s taken a strong, revolutionary Jesus and watered Him down to an anemic, emasculated figure in a children’s story that looks like he needs a Prozac and a sandwich. If all you know of Jesus is the Lamb, then you don’t have the full picture. He is also a Lion from the tribe of Judah. Both views have to be held in tension to have the full picture. 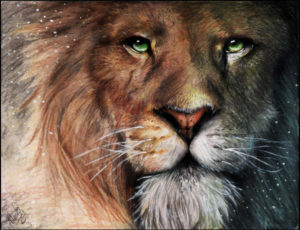 I love how C.S. Lewis represents Jesus in the Chronicles of Narnia book series. He is a lion whose name is Aslan. In one interaction, before the main characters were to meet Aslan, Lucy shares her concern about meeting Him. She says to Mr. Beaver, “I shall feel rather nervous about meeting a lion…is he safe?”

Let’s take a look at a scripture about our good King. It may be a side of Jesus that you have not seen before.

Previous Topic
Back to Lesson
Next Topic
Facebook Twitter Pinterest linkedin Telegram
Newer W01T04 – What are your questions about our Lord?
Older W01T02 – God created masculinity and femininity

Operation Restored Warrior is a nondenominational Christian non-profit 501(c)3 organization funded by the generosity of our partners, individuals and organizations dedicated to the healing and restoration of our veteran warriors who have been negatively impacted by combat.
© 2020 Operation Restored Warrior - All Rights Reserved
Login
Accessing this course requires a login. Please enter your credentials below!
Lost Your Password?